Why did the Indian team change their jersey colour in the middle of World Cup 2019?

In the middle of World Cup 2019, the Indian cricket team changed their jersey colour: 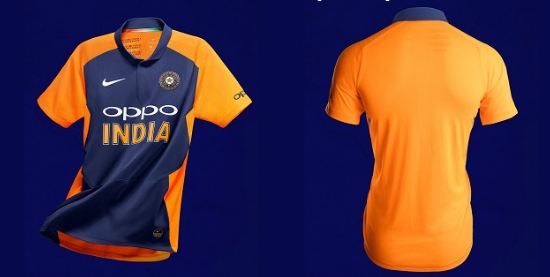 Why did they do this?

There is a new ICC regulation that teams in televised matches must have contrasting kits, just as in football or many other sports1. As India's normal blue jersey would clash with England's, one of the teams had to change - and the rules are that England always get priority as the home team for this World Cup, so India played the England match in their second kit.

A similar situation has already happened with South Africa who wore their yellow kit against Bangladesh; the oddity here almost that neither team has changed kit in the England-Afghanistan and India-Afghanistan matches.

Cricinfo has some more details.

1. It's obviously somewhat less critical in cricket that the teams were contrasting colours than in football. You could argue it's for the benefit of new television viewers who are used to seeing two "different" teams, you could argue that it's to sell more jerseys...

Not the answer you're looking for? Browse other questions tagged cricket jersey cricket-world-cup or ask your own question.

5
Why was the sponsors logo was missing?
11
How are the uniform colours determined in the World Cup?
10
Why does one player on a volleyball team wear a different jersey?
3
Why did match referee award the 1996 Cricket World Cup Semifinal to Sri Lanka 'by default?''
2
Is there any time limit for players to apply for review?
2
Are all the Under-19 players allowed to play only one world cup?
6
How Pakistan will qualify for semi finals in world cup 2019?
1
How to understand this new phase format table in cricket world cup 2019?
5
In the 2019 Cricket World Cup final, should Guptill's overthrow have resulted in 5 or 6 runs?