Why did Fernando Torres win the Golden Boot at Euro 2012?

Why has Fernando Torres won the golden boot when the following players also had 3 goals?

Torres won the Golden Boot because he was the most effective..

In the event of a tie, the Golden Boot will be awarded to the player with the most assists.
In a further tie, the winner will be the player spending the least time playing in the tournament(i.e On the pitch).
Fernando Torres secured one assist, the same as Mario Gomez, but spent a total of 189 minutes on the pitch compared to 281 minutes by Mario Gomez of Germany.

Over-all topscorer for Euro 2012 including qualification is Klaas-Jan Huntelaar (Netherlands) who scored 12 goals. 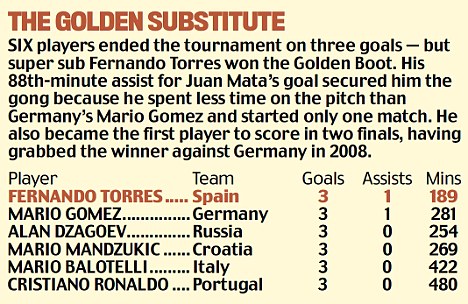 18
Why did Greece go through over Russia in Euro 2012?
8
What do Spain get for winning Euro 2012?
9
The difference between top goalscorer and golden boot winner
4
Why doesn't a domestic League-Cup double entail an automatic Supercup championship?
2
Why were the Football Euro championships such small tournaments decades ago?
4
Lowest percentage of non penalty goals scored by World Cup golden boot winners
7
Why is there no match for third place for the UEFA Euro 2020?