During the 2012 NL Wild Card game between the St. Louis Cardinals and the Atlanta Braves, a fly ball was hit by Atlanta. St. Louis let the ball drop due to miscommunication, but an umpire called "infield fly rule."

The ball clearly lands deep in the outfield, near the red circle below. 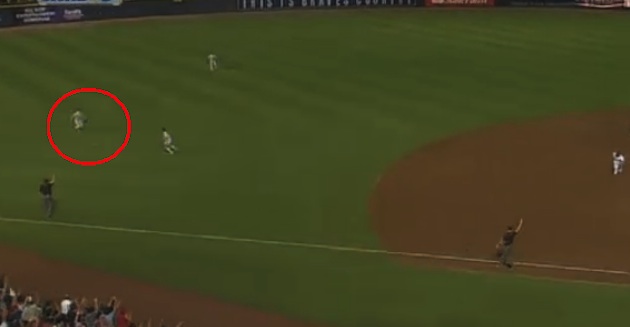 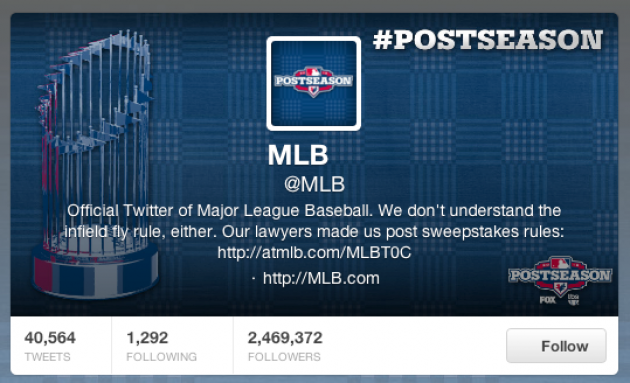 It's entirely up to the umpire's discretion:

An INFIELD FLY is a fair fly ball (not including a line drive nor an attempted bunt) which can be caught by an infielder with ordinary effort, when first and second, or first, second and third bases are occupied, before two are out. The pitcher, catcher and any outfielder who stations himself in the infield on the play shall be considered infielders for the purpose of this rule. When it seems apparent that a batted ball will be an Infield Fly, the umpire shall immediately declare "Infield Fly" for the benefit of the runners. If the ball is near the baselines, the umpire shall declare "Infield Fly, if Fair." The ball is alive and runners may advance at the risk of the ball being caught, or retouch and advance after the ball is touched, the same as on any fly ball. If the hit becomes a foul ball, it is treated the same as any foul. If a declared Infield Fly is allowed to fall untouched to the ground, and bounces foul before passing first or third base, it is a foul ball. If a declared Infield Fly falls untouched to the ground outside the baseline, and bounces fair before passing first or third base, it is an Infield Fly. -- MLB

What constitutes ordinary effort? How do you define that as anything but an arbitrary judgement for the umpire?

The point of the infield fly rule is to protect runners from a forced double play if a infielder purposefully drops an easy pop-up. This is why the rule is written so loosely and is generally left up to the umpire to define as to what "can be caught by an infielder with ordinary effort."

Technically, any ball hit high enough could be an infield fly even if it goes as far as the warning track. However, in this case, the umpire simply made a bad call. Balls that fly that deep are rarely called an infield fly.

Well, here's is what a comment in the official rules (pdf) says:

While I've never seen a hit like this declared an infield fly, any shortstop would've caught this ball without much effort under normal circumstances.

EDIT: Here is a video of another infield fly that is similar.
EDIT AGAIN: This analysis from Harold Reynolds, with other examples, states why it was the correct call. 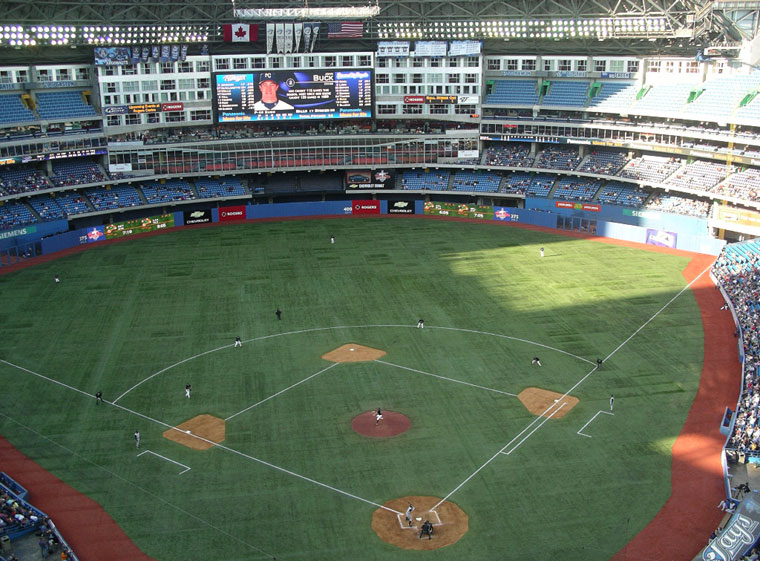 I've never seen a infield fly called that deep before. I've noticed a lot of Turfed baseball stadiums have a white line just beyond the base path. I was always under the impression that this was the cut off for an infield fly. The rule stats that "ordinarily have been handled by an infielder" arguments could be made that this wasn't an ordinary play for the SS. Also "decision should be made immediately." which it wasn't. The argument that he didn't know until that moment makes me feel that it should not have been called at all.

13
What is the history/reasoning behind the defensive indifference rule in MLB?
6
Who implemented the first infield shift?
5
Sac Fly or not?
7
Does any rule require MLB teams to announce probable pitchers?
7
MLB: Gray area concerning runners passing each other rule
4
Does MLB rules prevent blocking home plate on infield hits
5
Scorekeeping a fielder on a Sacrifice Fly
5
Wording in MLB slide rule
5
Why does the infield arc have a radius of 95 feet?
3
Sac fly and sac bunt